Walking back to my uncle’s apartment at three in the morning, after spending the night catching up with old friends, I was overcome with the excitement of the city.

Every turn I made, every gum plastered sidewalk I meandered down, there was life. I passed alcohol infused couples kissing goodbyes atop doorsteps. Runners sped by me with too much on their mind to lay their heads down for a full night’s sleep. Inside restaurant windows, chairs were stacked, yet staff were wide awake from the smell of cleaning products, leaned in towards one another, chatting over glasses of beer.

Rats scurried in the shadows and lonely, greying men stumbled slowly home from the nearest bar. Garbage and recycling clinked and clattered as dirt stained hands rummaged through, in search for another man’s treasure.

I could not help but smile, knowing I had the privilege to experience these moments that are instrumental in the make-up of the title “New York City”. Every person I passed was engaged. Whether it be with another person or in the thoughts inside their own mind, they were engaged. I was engaged with every movement that captured my gaze and molded into my drowsy thoughts. I climbed the six stories of the walk-up and curled up under the covers, now enchanted by not the visuals of Manhattan’s adrenalin, but the sounds.

Not only does this city never sleep, but it never ceases to tire. The energy buzzes in every borough, surges in the winding tunnels, under the concrete jungle; pounds in the heart of every person hustling to the other side of the crosswalk at eight in the morning.

The beauty of this culture capital, is found in every crevice. Walking back to Alphabet City, the street lights blinded the stars, not allowing any of the metropolis vitality to escape into the atmosphere, but containing it, offering every breath to inhale more life.

What to Pack for Hawaii

What to Pack for Hawaii

10 Facts to Know About Hawaii’s History Before Visiting 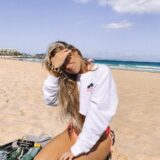